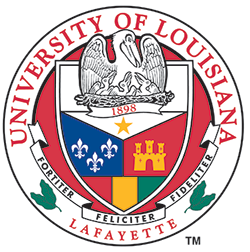 The seal was adopted May 11, 1926, when UL Lafayette was still known as Southwestern Louisiana Institute. Dr. Edwin Stephens, the University’s first president, helped design it, along with Ellsworth Woodard, director of the Newcomb College art school, and John McBryde, a professor at Tulane University. Elements of the seal reflect Louisiana’s History as both a French and Spanish colony. The three fleurs-de-lis refer to France, while the castle denotes Louisiana’s connection to Spain. The pelican is symbolic of Louisiana. Oak leaves represent strength and endurance of the oak tree. The seal includes the Latin motto “Fortiter, Feliciter, Fideliter,” which means “bravely, happily, faithfully.”

The institution’s name was updated in 1960, when it was recognized as a university and became the University of Southwestern Louisiana. In 1999, USL’s name was changed to the University of Louisiana at Lafayette to better reflect its stature as the state’s second-largest university and an institution with statewide and national- rather than regional- influence. In that same year, the seal was modified to include elements of the Acadian and Creole flags to reflect the University’s cultural diversity. The gold star on a white background symbolizes Acadian culture; the red, gold, and green stripes represent West African heritage.